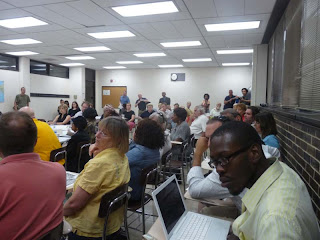 An early morning crowd of 80 residents attended a meeting on Thursday at Truman College to hear their alderman and other city officials explain the success of the Wilson Yard TIF and why its budget needs to be increased by $54 million, but it isn’t exactly known yet what the money will be used for because an amendment needs to be passed first.

The first Wilson Yard Task Force meeting to be convened in over two years was designed to be informational, yet often became bogged down in minutiae as Ald. Helen Shiller (46th Ward) fielded residents’ pointed questions about a proposed amendment to increase the Wilson Yard TIF budget from $58 million to $112 million.

Read the rest of this article about the sometimes-contentious meeting by clicking here.