Police Activity At The Wilson El 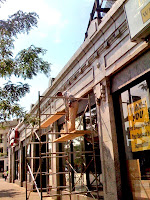 We're hearing from a passenger that there's police activity on the last car of a southbound train stopped at the Wilson station. Twelve police came on board, four with guns drawn. The train is moving again; does anyone know more about what's going on? Please leave any new information in the comments.

Update: A reader reports, "There was an offender who is now in custody on the second from the last car of the Red Line. I am not sure what he did but he is in custody."
By Caring Neighbor - April 24, 2009