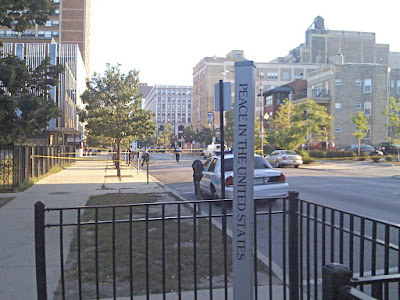 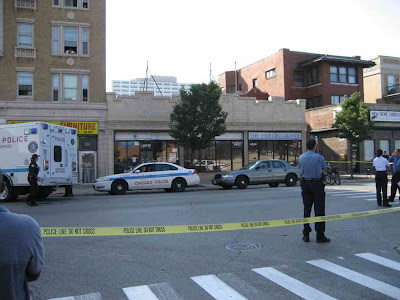 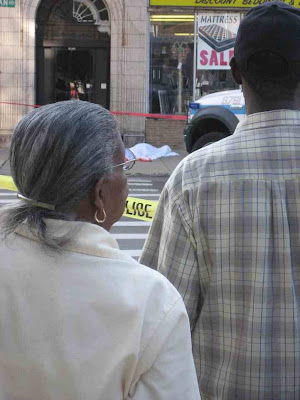 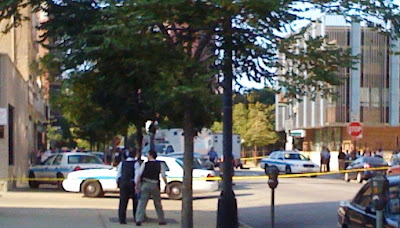 These photos, and some that are linked to in the comments, are of a real person. He was a neighbor to those of us who live in Uptown and a friend to some of our readers. These photos may evoke strong emotions. Please be prepared if you make the decision to click on them or on the links contained in the comments.

UPDATE# 6: Tom Mannis at "The Bench" shares his account of this afternoon's shootings as well as the memorial that took place the evening. Read about it here.

UPDATE #5: Lorraine Swanson just released a News-Star "Web-Extra" on this afternoon's shooting. Read all about it here.

UPDATE #4: A reader just sent in more photos of the scene of the crime which is indeed in front of the proposed Labor Ready location on Sheridan. Another reader tells us that a memorial of candles is now up where the victim was found.

UPDATE #3: Check out Channel 2's coverage here. It mentions the second victim is in critical condition.

UPDATE #2: News crews from many media outlets are on the scene. Sheridan has been closed between Lawrence and Gunnison, and police are directing traffic away from the area. Avoid driving there if you can; traffic's a mess.

UPDATE: Witnesses tell us that one victim was dead on the scene, so one shooting is now a homicide. The body was in front of 4830 Sheridan (the proposed site of Labor Ready). The other victim was gunned down in Weiss Plaza (the JJ Pepper strip mall), and was taken to the hospital in unknown condition.

We're just shaking our heads in sadness, disbelief and disgust with this summer of senseless violence in our community.

Around 3:20 p.m. today, there were two separate shootings within a couple minutes of each other, at JJ Peppers (Lawrence & Sheridan) and a half block away, at Gunnison & Sheridan. Two people were injured, and witnesses tell us that -- judging from the wailing of women who saw the victims being taken away -- these may have been more than "flesh wounds."

We'll keep you informed as we receive new information.