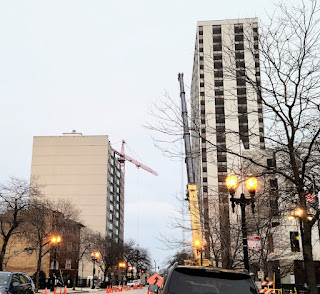 There's been a lot of new construction and new businesses on Wilson Avenue in the Sheridan Park and Wilson L areas, but it's getting really busy further east on Wilson, on the first couple blocks where housing is allowed to be established.

There were two large cranes in action on Tuesday afternoon, at 835 Wilson and Wilson/Clarendon.

Stephens Commons, the all-affordable senior building at 835 Wilson, continues its very quick rise, with pre-cast concrete slabs being brought to the site and assembled there. It's starting to look a lot like the architectural rendering already! This building site has been vacant for decades, and is being partially financed with the help of Lake View Towers, the "Twin Towers" co-op immediately east of it. 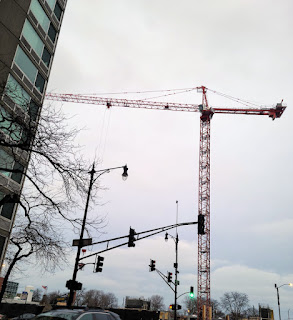 Half a block east, 4600 Marine Drive is beginning to look a lot like a building site instead of a parking lot it was. A very large crane is on-site, and the first walls are beginning to go up.

On December 3rd, Weiss was acquired by Resilience Healthcare, which is owned by Manoj Prasad, who has a track record of turning around community hospitals and improving their financial and clinical operations. According to Crain's Chicago Business, Mr. Prasad "wants to expand services offered at the two hospitals and stabilize them after challenges presented by the COVID-19 pandemic."