Alderman Cappleman released his end of year recap of 46th Ward news this morning. Although it's worth reading the whole thing in detail, we thought we would summarize some of the highlights here: 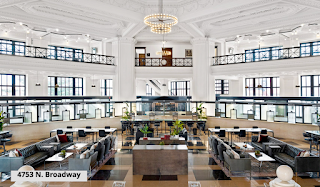 When I first entered office back in 2011, my goal was to make the 46th Ward a place where a young parent with their child would feel at ease walking on any street in their community. It was a big dream given that some parts of the Ward were in the 95th percentile for violent crime. Today, we're experiencing the lowest rate of violent crime in our Ward's history.

I know better than to take all the credit. It really goes to all of us working together. Crime goes down when the police, Cook County State's Attorney's Office, our local chambers, our area businesses, and most importantly, our residents are all working together.

When word got out that the 46th Ward was a great place to live, it became a sought after community. Two weeks ago, the headline from Block Club Chicago stated, "A Wave Of Construction Is Changing Uptown's Wilson Avenue. Here Are the 4 Projects Adding 650 Apartments" and no one, not even me, would have ever imagined such a thing just 10 years ago.

Now, we're going full steam ahead with all types of projects and we are still experiencing very low vacancy rates. It certainly didn't come overnight, but nothing worthwhile happens that way. It was hard work. This newsletter includes a summary of all we accomplished this year.

With respect to development, Alderman Cappleman noted that ongoing and completed projects are bringing 2,093 new units to 21 different sites. 1,895 of those units are being built on property where no housing previously existed. 9 developments qualified for the Affordable Requirements Ordinance,  adding 120 onsite affordable units and in-lieu fees totaling $4.6M.

With respect to the entertainment district, financing is still in process for the Uptown Theatre, but the plan is to start rehab work before the TIF expires at the end of 2025. Additionally,

Another very successful year for the 46th Ward and Uptown, and we thankful for all that Alderman Cappleman and his team do.

We are also hopeful that the new 46th Ward alderman will continue to focus on continued growth of the Ward in 2023 and beyond.