Lorali (Former Viceroy Hotel) Gets The Okay To Resume Renovations 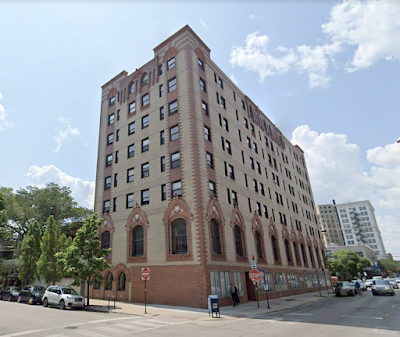 The Lorali (1039 W Lawrence) announced its plans to convert 161 SRO units into 80 residential apartments plus ground floor retail in 2019, but the age and condition of the building made it hard to get the project off the ground. The owner finally got the red tape and permits sorted out late in August.
A reader sent the attached photo and let us know that construction work began on Tuesday, August 30th, and is ongoing.
The price of the renovation will be $5,000,000, according to the building permit, and will include interior and exterior renovations, which will include a lounge and a retail space. 10% of the units will be classified as affordable housing and former residents of the Lorali will have first choice to return.
A brief history of the building: According to Jazz Age Chicago, the Viceroy Hotel was built in 1926 as a residential hotel with 144 rooms, and was designed by the same architects who came up with the Aragon Ballroom and Lawrence House.
The beautiful exterior terra cotta was manufactured by the American Terra Cotta Company. The hotel originally had an indoor swimming pool. The nightclub "Viceroy Palais" was on the mezzanine floor and had a house band, Phil Levinson's Viceroy Palais Syncopators. Room rates in 1928 started at $12.50 per week.
After the hotel closed, the building was converted to senior living in the late 1960s and was then known as the Crown Plaza. The current owner, Jim Stoller, bought it approximately 23 years ago.
Because of the building's age, it was functionally obsolete and no longer useable as a living space due to the requirements of the city's Life Safety Ordinance.
As part of the current renovation, the owner is bringing the building up to code as part of the renovation. The city requested that the outside fire escapes be removed and sprinklers and other safety equipment must be installed to meet code. The elevators are also original to 1926 and must be replaced, as there is no one who manufactures parts for them anymore. There are other changes that must be made to make the building ADA-compliant, and the plumbing and heating systems must be replaced.
We expect to see construction complete by mid-2023 with occupancy shortly thereafter. We are thrilled to see this beautiful building saved and part of Uptown for many years to come.
By Kate Uptown - September 01, 2022