After the Uptown based Institute of Cultural Affairs (ICA) created a program to study restoration of the original natural features of the Lake Michigan coastal zone in 2016, the work has paid off in the form of the new Lincoln Park Uptown Coastal Natural Area, coming soon to Lincoln Park at Marine Drive. 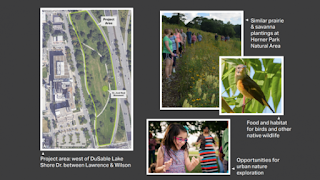 The ICA ran the "Out and About Uptown’s Coast" series in 2017 and 2018, supported by grants from the Illinois Department of Natural Resources (IDNR) and funding from the National Oceanic and Atmospheric Administration (NOAA). A plan was conceived to create a restored native habitat west of DuSable Lake Shore Drive.

The plan seeks to build on the landfill projects of the 1930s, which filled in the area roughly from Marine Drive all the way to the current Montrose Beach. The original Arthur Caldwell plan for the park called for the installation of thousands of native shrubs and trees, but that goal was only party accomplished.

Before the current empty grassy area, the area was once filled with a "long meandering meadow" west of Lake Shore Drive between Lawrence and Foster and a "smaller meadow" between Wilson and Lawrence. Although most of that vegetation is now gone, the current sidewalks are in the same place as the original pathways.

Fast forward to 2021, when the Chicago Park District, working in concert with the ICA, received a grant from the Illinois Coastal Management program of the Illinois Department of Natural Resources to replace the existing grass lawn with native prairie and savanna plantings.

Per plans, the project will begin in the late summer or early fall of this year. Expect fencing to be placed, removal of non-native vegetation, installation of native plants and laying of seed. Signage will educate and guide visitors down the existing paths.

The new natural area will be similar to the ongoing work to create a Horner Park Natural Area on the bank of the Chicago River. We expect that patients at Weiss Hospital and residents of the upcoming 4600 N. Marine will particularly appreciate the beauty of the new landscape, and we look forward to strolling through the area with visions of Arthur Caldwell's original plan in our head.