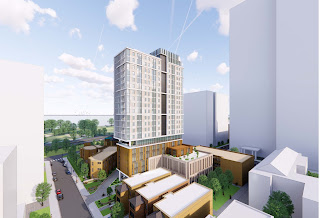 After Buena Park Neighbors came out in favor on Monday, 46th Ward Zoning & Development Committee members voted 21-7 in favor of the development on Tuesday.

The Alderman's statement is reproduced in full below:

I want to thank the 46th Ward Zoning and Development Committee for participating in a 3-hour meeting to discuss the 640 W. Irving Park Road proposal. Click here to view a videotaped recording of this meeting. A special thanks to Alex Wolking from Buena Park Neighbors for all the work he put into this with negotiations with the developers, his block club, and all the many neighbors who live in close proximity to this proposed site. Alex started working on this in early 2020, right before the COVID pandemic broke out.

Each zoning committee member provided a reasoning for their vote which both gave me a better understanding of the varying positions around this development along with the potential negative and positive repercussions of this proposal.

The concerns were primarily centered on the building's height that would block other people’s views, the increased traffic, parking strains in an area that’s already clamoring for more parking, the increased number of delivery trucks navigating through Bittersweet, and the belief that additional senior housing was not needed for the area. I didn't take lightly the concerns expressed by residents who live close to this proposed site. They are the ones who would bear the brunt of the negative repercussions of this development, and I am thankful for their continued engagement, negotiations, and suggestions throughout this process.

Other residents mentioned the benefit of a proposal that would provide the needed funds to restore the historical buildings on that site that were estimated to cost around $50M to restore. Additional benefits included the rehab of the historic theater space that would also be accessible to the community, housing that would allow area seniors to remain in the community, having 20% of the onsite units remain affordable at 60% of the Area Median Income, and how this development would allow the American Islamic College to create an endowment fund that would allow them to provide education opportunities to the Chicago Islamic community. It was also stated that if this proposal didn’t pass, another plan with a similar size high-rise would still have to be built in order to supplement the costs of the $50M needed to rehab the historic buildings on this property.

After hearing many residents weigh in on this proposal, I have decided to support this development for the following reasons:

As this project continues to move through the process, I will continue to work with residents to ensure that concerns about construction and operations are addressed. Next steps will involve this planned development going before the Chicago Plan Commission, then the Committee on Zoning, Landmarks, and Building Standards, and finally to the full City Council. Thank you to everyone who has dedicated their time and energy to this in-depth process.