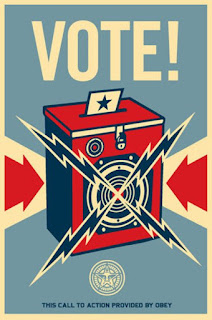 If you haven't yet voted in the upcoming election, there are plenty of options still available.

From now until Monday, you can vote at any Early Voting location in the city. The hours are 9am to 5pm Saturday and Sunday, and 8:30am to 7pm on Monday. All locations are listed here; the ones closest to Uptown are:

If you have a Mail-In Ballot, your best bet is to bring it to a dropbox anytime up to and including Tuesday. There are dropboxes at each Early Voting location (you won't have to wait in line, you can just drop it off).
There's also a dropbox inside the Bezazian Library, 1226 West Ainslie (open Saturday and Monday during library hours), and on Election Day only, 6am-7pm, at Wrigley Field (at the Gallagher Way Gate, on Clark).
If you're waiting to vote on Election Day, which is Tuesday, November 3rd, you must do so at your precinct's polling place between 6am and 7pm. Or you can go to the United Center (1901 West Madison), which is a new thing, Election Day only.
Closing with a quote from the late, great John Lewis:
"The vote is precious. It's almost sacred, so go out and vote like you never voted before."
By Kate Uptown - October 31, 2020