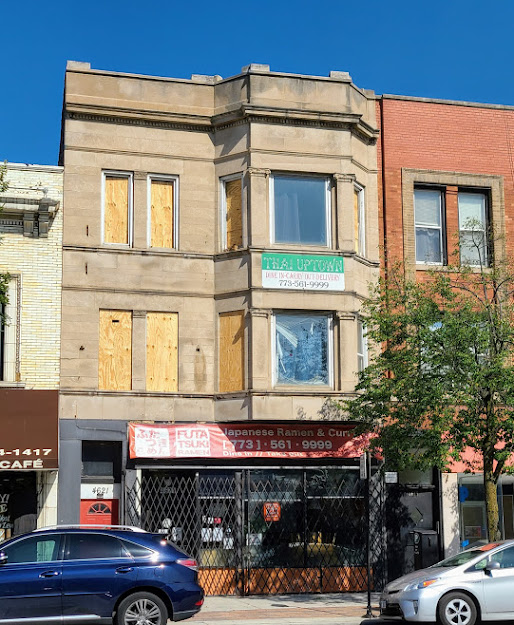 The building at 4621 North Broadway caught on fire in the early hours of Saturday, September 12th. It began on the second floor wooden deck at the rear of the building; flames quickly spread to the third floor deck and into both apartments.

Luckily, all residents made it out safely.

Sadly, the popular family-owned restaurant Futatsuki Ramen, located at street level, suffered water damage from the firefighting efforts, and will be closed for the foreseeable future while the damage is assessed and corrected. On Saturday, Futatsuki's Facebook page said:

"Sorry for the inconvenience due to the water leaking it caused the ceiling damage we will be closed until further notice."

The fire followed a loud explosion shortly after midnight. Both decks were immediately engulfed in flames, neighbors say.  Broadway, Winthrop, and Leland were all blocked off with firefighting equipment for several hours. After dousing the flames, firefighters cut holes into the roof to ensure no embers were still active.

Buildings on either side of 4621 Broadway were not damaged.

The building dates back to 1902 and is considered a contributing building to the Uptown Square Historic District.