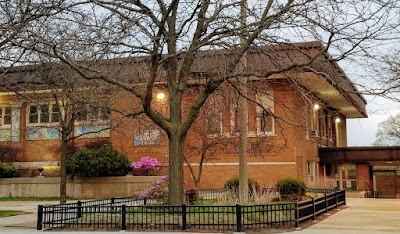 Today is a good day for Uptown! The City Council has approved a plan to pay for the first phase of restoring the Clarendon Park Fieldhouse, which will correct the worst problems of its crumbling infrastructure.

On Monday, after the Finance Committee of the City Council approved the deal, Ald. Cappleman posted on Facebook:


"Had we waited until the year 2034 for sufficient TIF to accrue to do this rehab, the building would have fallen into more disrepair and would have required demolition. Instead, we had the developer contribute the entire TIF amount into a fund and now he will get paid back in 2034. This win feels good."

After the necessary renovations have been made to keep the fieldhouse standing, Phase Two will add features to enhance the building for those who use it.

According to Ald. Cappleman's 2019 summary:


"The second stage of this extensive renovation will complete the full project when additional funds are raised. The rehab will include draining work to prevent further flooding, a new gym, redesigned meeting rooms, and a new dance space for Kuumba Lynx."

We've been hearing about the necessity for an improved and safer fieldhouse since 2010, when then-Ald. Shiller created the Montrose-Clarendon TIF.  One of the stated reasons for the TIF was the renovation of the fieldhouse.

After a decade of votes, debates, community meetings, and open houses, it's good to see the financing finally in place. We'll let you know more about the restorations as we find out more.

The fieldhouse was built in 1916 and was known as Clarendon Municipal Bathing Beach. But time has not been kind to it, and by 2015, it was listed by Preservation Chicago as one of Chicago's most endangered buildings.

We are so happy to know that this once-magnificent building will be preserved!
By Kate Uptown - May 20, 2020