Some Changes Have Arrived At Drink and Ink 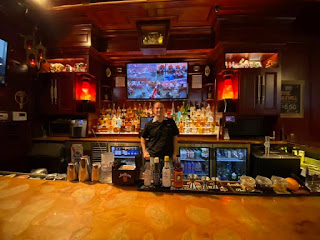 So it's with great interest that we read about the changes going on both behind the bar and behind the scenes. If you haven't been there yet, this may inspire you! From the Facebook page:

"Drink and Ink is officially reopened. But why were we closed? I guess if you’re not an every day regular, you deserve an explanation.

Paul, who has been running the Tattoo Factory since 1996, decided to add a small intimate tavern so the clients would have a nice comfortable place to wait while their friends received tattoos. Five years ago Drink and and Ink opened, and it’s been a great and fun five years. But it’s the regulars that kept the place going. The ones that liked it here so much they made it their hangout.

It seems like the one thing Paul is really good at is running the back of house. You see this at the Tattoo Factory. The artists are the stars and Paul is usually hiding back in his office taking care of the mundane daily operations. This has worked out great for the Tattoo Factory. God bless.

Now looking at Drink and Ink, something was missing. A tavern has a heart of its own. A beating living thing that requires attention. Attention that Paul was unable to provide. Sure, the place was clean and stocked, but there was no soul. Which brings us to Josh.

Back when Christina suggest I talk to Josh because he’s good and I’d like him, who knew just how right she would be!

Josh Herbener tended the bar here for a while. Then went on to manage The Foundation Room. I wished him luck and he stayed in contact. Always giving me his advice on what was needed and what was missing from Drink and Ink.

Well, a few weeks ago I realized Josh was right. I belong in the back of the house. I thrive there and enjoy it. What Drink and Ink needed was a little fine tuning and updating, plus a true front of house person.

So we closed for a little bit. During that time, the back bar was redone. Lava lamps weren’t the only thing that happened. Behind the scenes was a full blown audio visual upgrade.

We now have crystal clear audio with stations from around the world. The TVs were upgraded to high definition as was the sound system. Playing the jukebox will now override the televisions or stereo. Like it should. We can blue ray video in 4K. Plus four people can play the PS4 on any TV they want. With sound. We even kept a separate TV off in the corner with old times Mario Cart and such.

But what about Paul? What about Josh? Let me tell you. Paul is moving to the back office and Josh is officially in charge. He’s already brought in a happy hour, expanded the drink menu, and added a much classier experience with some true classic cocktails.

Plus to shake it up a bit we’re going to give you some more entertaining and enlightened staff. Mike Pazmino, Nick Ramagiz, Kevin Macomb are all taking shifts along with Sal and Josh.