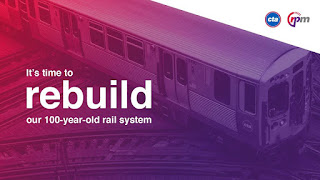 We've been posting since 2015 about the upcoming modernization of the Red and Purple Lines north of Wilson. The massive project -- the largest in CTA's history -- involves the tracks and four stations between Leland and Bryn Mawr being completely replaced. It's all set to begin by the end of the year and is projected to be completed in 2025.

There will be open houses held at the end of the month to help residents and businesses know what to expect as this project gets going. Here's what the Facebook event says:

"Come out for an informational meeting hosted by Chicago Transit Authority about the Red Purple Modernization (RPM) project.

At this meeting, you will learn about:
48th Ward Alderman Harry Osterman will speak at 6pm on January 28th. Otherwise, there is no formal agenda or presentation – the meetings will be open-house style to allow you to get the information you want.