Two people have been charged with multiple counts in the horrific incident on Monday night in which a one-year-old child was shot in the head during a domestic argument between adults in the apartment, according to police. 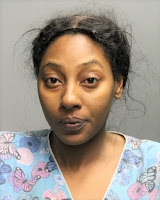 Both adults were held for questing immediately following the incident. Mr. McCoy was arrested at Weiss Hospital on Monday shortly after bringing the child in for medical treatment. Ms. Smith was arrested shortly after midnight Wednesday at the police station at Belmont and Western.

A reminder that these are initial charges and have not yet been heard in court. Both Mr. McCoy and Ms. Smith will appear at bond court at 26th and California on Thursday morning.

As awful as this situation is, we are relieved to know that the one-year-old boy survived being shot. There've been no updates since Monday, when news reports said his condition had been upgraded to "serious but stable." We hope he has no lasting effects from his ordeal.
By Sonny Side Up - January 29, 2020