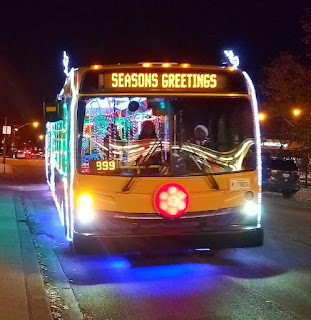 Santa and his CTA helpers are making their way around the city on various bus routes, beginning Thanksgiving weekend.

Use the Holiday Bus Tracker to know exactly where it is when it's in service!

There are a few chances to take a ride in the area around Uptown:

Then it will leave on Route #22 (Clark bus) from the Howard Terminal southbound, at 3:55pm, making its way through Uptown to downtown. (Our advice: Allow 10-15 minutes to make its way to Foster, or be assured of a seat by boarding at Howard.) 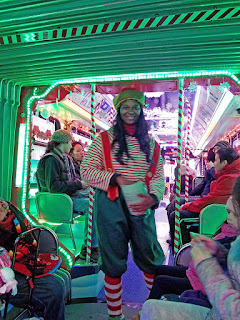 Saturday, November 30th:  It will leave the Howard Terminal as the #22 Clark bus at 12:30pm and go southbound along Clark, including through Uptown (our advice: Allow 10-15 minutes to make its way to Foster, or be assured of a seat by boarding at Howard.).

There will be a photo session at the Howard Terminal between approximately 4:10pm and 5:05pm.

Sunday, December 1st:  It becomes the #92 Foster bus, and leaves Berwyn at the Red Line station at 12:13pm.  It will travel west on Foster to the Jefferson Park Blue line.  At 1:05pm, it will become the #91 Austin bus and travel that route.

At 5:40pm, it will again turn into the #92 Foster bus, and depart the Jefferson Park Blue Line at 5:40pm, going eastbound on Foster until it reaches the Berway Red Line.

That's it for the Holiday Bus in our area this year, although it will continue around Chicago throughout December. Its complete schedule is here.

The Holiday Train will be in Uptown on the Red and Purple Lines on Tuesday, December 17th through Saturday, December 21st. We'll post a schedule closer to those dates and link it here.
By Kate Uptown - November 24, 2019