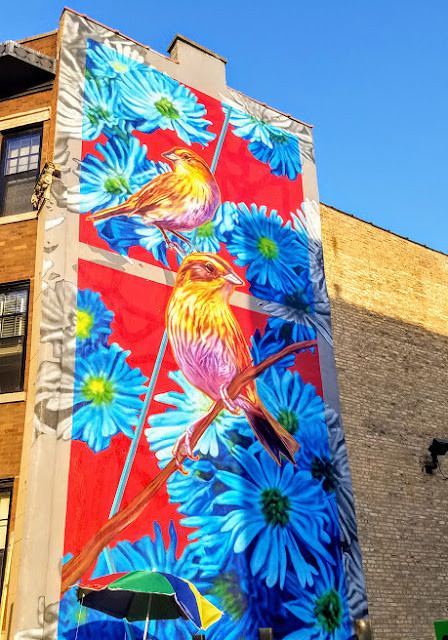 The Blue Aster flowers (indigenous to Illinois) and the Nelson Sparrows (often seen at Montrose Harbor) are really coming to life on the mural at 835-837 West Montrose. It's been a joy to watch Florida-based artist Steven Teller work, often late into the night, illuminated by spotlights.

If you'd like to read more about the project and the artist, here's a whole page about them.

On his Facebook page, Steven says, "Final image coming really soon then onto the next Uptown, Chicago project."

Hmmm. A little bird told us that the 4600 block of Clifton may be worth watching for the next live art project(s).

(A friend pointed out that Montrose Avenue is practically an aviary now, with the Phoenix Rising sculpture at Montrose/Sheridan/Broadway; the Nelson Sparrows at Dayton; and the Bird Sanctuary and its famous piping plovers at the lake.)
By Sonny Side Up - August 03, 2019