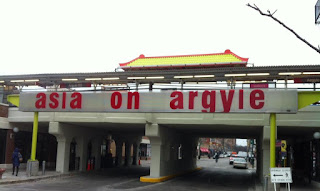 Monday afternoon, two men were shot while they were standing on the platform of the Argyle Red Line station. Readers report hearing 10-15 shots fired at approximately 4:10pm.

Police say the shooting victims were specifically targeted, and no one else was hurt. One victim, age 34, is in critical condition after being hit by four bullets. He was taken to St Francis in Evanston, the nearest hospital with a trauma unit.

The other victim, age 41, received a graze wound and refused treatment at the scene.

The shooters are being sought. They escaped by foot, running east on Argyle. As a result, the police helicopter circled over the Argyle area for approximately 45 minutes, and police and EMTs responded en masse.

According to CPD spokesman Anthony Guglielmi, "The area is heavily saturated in HD crime cameras and detectives are reviewing digital evidence.  Anyone with info send anonymously to http://www.cpdtip.com."

Later, he tweeted, "Area North Detectives have good leads from the community as well as physical and digital evidence from the scene. As far as the two victims, they are both well known to CPD. We believe they were the intended targets of the shooting.  Investigation continues."

Trains approaching the Argyle station were immediately stopped, and the Fire Department came to the scene to help passengers disembark. For three or four hours after the shootings, Red Line trains in both directions bypassed the station while police gathered evidence.

These are the fourth and fifth victims of gun violence on Argyle since mid-March. For more details, see here and here. According to Ald. Osterman, arrests have been made in both of the previous instances.

A complete list of all 2019 CAPS meetings in Uptown, in both the 19th and 20th Districts, is here. It is also always linked in the sidebar on the blog.

We will update as more information becomes available.
By Sonny Side Up - May 08, 2019