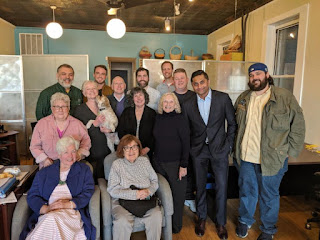 Ald. Pawar, who made a 2011 campaign promise that he would not seek a third term in office as 47th Ward alderman, released his final newsletter today, on his last day in office:

"This is it! This is my final newsletter as your alderman. I remember writing my first one 8 years ago and now here we are.

On Monday, Matt Martin will be our alderman – and he is going to be great. My office has provided everything he needs to get going on Monday.

As I was cleaning out my office, I found the first speech I gave as alderman. On inauguration night in 2011, I said this in front of our community and my supporters: “This will probably be the last time I get to own my story – everyone has told the version that is easiest to tell. But you deserve to hear the whole story; it is a story about personal sacrifice, shoe leather, friendship, and you.” Looking back, I was right about my story but what struck me was the part of the speech where I talked about quitting the campaign. Here it is:

“I was a full-time graduate student and working and campaigning full-time. I had a book contract to fulfill. And fifteen months into the campaign, I was working 15-18 hours a day and the campaign was running on my credit card. I was tired and felt defeated. So I quit. I was done with it. I walked away.

But being the good friends that Charna and Sam are, they got me to knock on doors one last time. It was cold and I was tired. And that is when I realized that money and resources from progressives and donors would likely not come. But, it was during that night of door knocking that there was some clarity.

There is nothing more pure about our political process than talking to you. It didn't matter that I had no money or that I was a renter or young or whatever trope was being used against me. What mattered was that we were all concerned about schools, services, and our city. I was back--and all-in.

It was after the debate at Coonley Elementary that we got the Sun-Times and Chicago Tribune endorsement. The rest is history.

But I never thought I would give a speech and admit that I quit. The reason I am telling you this story is because I want everyone to know how important it was to me when I got your support. And how hard it was for me when we felt alone. And most important of all, the next time someone comes to you for support, whether it be for a recommendation, a box of girl scout cookies, a lead on an internship, or even someone who is running for office, that you believe them like you believe in a 10 year old who wants to be an astronaut.

We never tell a child to stop believing – we encourage idealism; yet as adults we often don’t support people who swing big. Public service and public engagement and real change is about supporting families, communities, and individuals who think big, who are willing to put themselves out there, and need your help. It’s not about giving big – it’s about giving something – just what you can—sometimes a signature on a petition, a $5 check, or just showing up in the cold. This is how we should be supporting one another and how we get to real change."

You allowed me to go big. To pass legislation. To organize around neighborhood high schools. To challenge the narrative that poor people are poor because they make bad decisions. To run for governor and challenge wealth worship. We accomplished a lot. I made some mistakes along the way, but you stuck with me and we stuck together.

Now let’s do the same for Matt and Lori.

One last time: thank you to Jim, Brad, Erick, Ernie, Dara, Danny, Bill, and all of our amazing volunteers. Thank you to Charna – my partner and the love of my life – for making all of this possible.

﻿Thank you and see you around the neighborhood.