Ride Ho-Ho-Home With Santa On The CTA

The CTA has announced the schedules for its Holiday Bus and Holiday Train, so time to make your plans if you want to ride with Santa, elves, music, and candy canes. 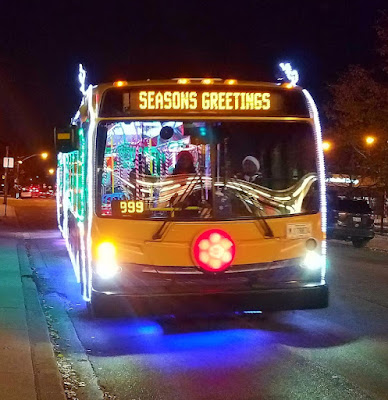 The CTA's Holiday Train gets more press, but the Holiday Bus journeys through Uptown first this year. Santa sits in the back in his sleigh, elves pass out candy canes, and carols play throughout the trip. (See here for last year's trip.)

Here's when it comes around our area:
You can see the entire daily schedule here, and on the day of each trip, check the Holiday Bus Tracker.


The Holiday Train is already riding the rails around the city, but it doesn't get here until closer to Christmas.

Here's the schedule of its trips through Uptown:
The entire schedule is here; exact times will be added closer to the dates. The CTA's website says, "The train generally operates from about 1pm to 8pm on weekends and 3pm to 7pm on select weekdays (schedules for each rail line will vary), and will make stops at all stations along the respective routes."
By Sonny Side Up - November 28, 2018