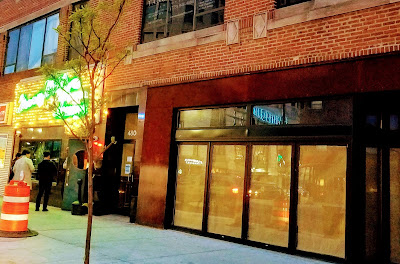 What's the logical new next-door neighbor to the most legendary jazz club in the city?

How about some blues to go with the Green Mill's jazz?

For months, rumors have swirled that the Green Mill's long-time owner Dave Jemilo is opening up a blues club in the former Crew storefront one door north of his little gem at 4802 North Broadway. 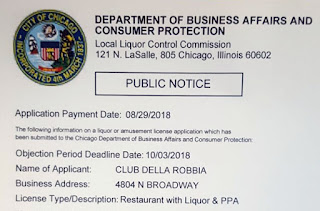 This week public notices were mailed to neighbors regarding "Club Della Robbia" at 4804 North Broadway, about the application for an on-premises liquor license and PPA (Public Place of Amusement) license. One of the two principals of the Club Della Robbia is Dave Jemilo.

The name is a wink back to a century ago. "When it opened in June 1914, Green Mill Gardens was one of the most elegant night spots in all of Chicago. Its elegant Della Robbia dining room offered patrons nightly cabaret performances while its 2,500-seat outdoor sunken gardens hosted band concerts during the summer months," according to Jazz Age Chicago.

In keeping with its namesake, Club Della Robbia will serve food, unlike the Green Mill.