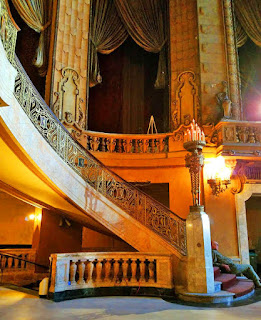 It's getting more real!


The Commission on Chicago Landmarks voted unanimously to approve the Class L Property Incentive for the Uptown Theatre. There will be more hurdles but it will all be worth it. Can’t wait for the ribbon cutting ceremony in 2020. #ChicagoProud #UptownTheatreProud

Soooo hopeful this happens as projected.

Thank you, Commission on Chicago Landmarks* and all the theater's champions!

*According to the website, former 48th Ward alderman Mary Ann Smith, who advocated for the theater's protection and resurrection for many years, is one of the voting members.

Update: A commenter on Facebook says, "Alderman Cappleman video recorded the Uptown Theatre portion of today's hearing, which he intends to upload to YouTube.

"The most interesting information presented today, for me, was Jerry [Mickelson, owner of the Uptown Theater].

"Jerry described the entertainment industry's reaction to the renovation announcement. One female performer desires to re-open the newly renovated theater. One group hopes to book the venue for 5 successive New Year's Eve performances, commencing in 2020. A surprisingly large number of Nashville agents have expressed interest in booking their performers into the theater. And there is the possibility of an artist-in-residence arrangement, similar to the one between Billy Joel and Radio City Music Hall. Very exciting times for our neighborhood!!!"

Update: Blair Kamin of the Tribune was there and has a lot more information on what a Class L Property Tax Incentive is and what happened during the meeting: Renovation plans for Uptown Theatre, old Cook County Hospital get boost from landmarks panel. Included, "The City Council needs to give final approval to the commission’s property tax recommendation."
By Sonny Side Up - August 02, 2018