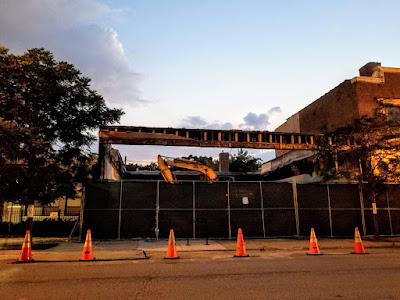 Demo is well underway at 4720 North Sheridan. As of Monday night, when this photo was taken, all that remained of the humble one-story building were the side and back walls and an I-beam across the front. As of Tuesday, the I-beam had been removed.

According to the meeting summary on Truman Square Neighbors' Facebook page, full demolition is expected within the week. Then either a five-story building (under current zoning) or a six-story building (under requested zoning) will be built, depending on the outcome of the residents' votes.
By Sonny Side Up - July 24, 2018