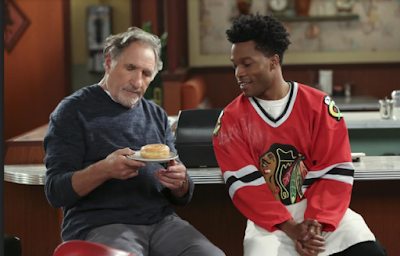 Awww. The CBS sitcom set in an Uptown donut shop, Superior Donuts, has been canceled after two seasons. The season finale ended with Arthur, the old-school proprietor of the shop, deciding to sell the donut shop to his entrepreneurial next-door shop owner, Fawz, to the dismay of his customers and his only employee, Franco.

While the series had occasional Chicago-centric errors that caused real Uptowners to roll their eyes (a dime for a parking meter, Bryn Mawr Avenue featured in the wide shots of Uptown), it was nice to see our little part of the world showcased on national television.

Well, at least we still have Uptown Donuts... and there's always the Tracey Letts play upon which the sitcom was based.
By Kate Uptown - May 17, 2018