The United Colors of Uptown 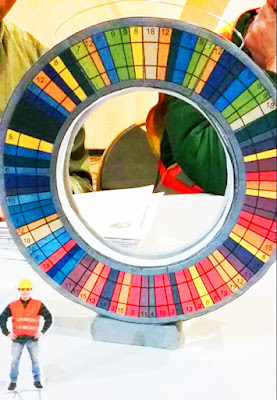 "This gives everyone an idea of what the 17’ sculpture in front of the Riv will look like. The sculpture can be lit at night (and also turned off) and will be a great addition to highlighting our Entertainment District. Installation will be after the July 4th weekend."

Later he expanded in comments:

"What surfaced over and over again was highlighting the diversity found in the ward, so the different colors signify the many cultures that exist in Uptown. People also wanted something circular to highlight unity among all the different cultural groups. The size was determined by the desire to have southbound traffic on Broadway see it from their perspective as a gateway into the Entertainment District."

"The colors represent all the many different cultures in Uptown (the most diverse in Chicago) and the circle represents the strength of all the cultures when we stand united together. We are not a melting pot, but rather a mosaic of people celebrating our uniqueness."

We like that it's bright and light-hearted, and based on a design by one of our favorite Uptown artists, Lowell Thompson. We think it will look great across the street from Hebru Brantley's Flyboy mural.
By Kate Uptown - May 19, 2018