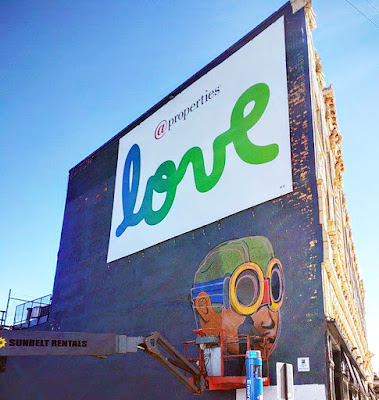 If you'd like to see one of the rising stars of the art world in action, you'll have a chance in upcoming days. Hebru Brantley, whose work has been shown nationally and internationally, is in the process of creating a mural on the side of the Uptown Broadway Building (4701 North Broadway) featuring his recurring character, Flyboy. He was putting some of the finishing touches on the face earlier today, as shown above.

Mr. Brantley went from being a self-described Chicago "graffiti kid" to doing work commissioned for the CTA at its McCormick Place station and designing for Nike. LeBron James and Cuba Gooding Jr are both fans. He has said that Flyboy was inspired by Japanese anime and the Tuskegee Airmen aviators.

We don't know what the finished product will look like, but you can take a look at another of his recent works, a four-story mural on Wabash in the South Loop.

It's really exciting to have an artist of his caliber working and displaying right here in Uptown. With the Wilson L art being done by Cecil Balmond, and now a mural by Brantley, Uptown's public art scene is really taking off.
By Kate Uptown - September 30, 2015