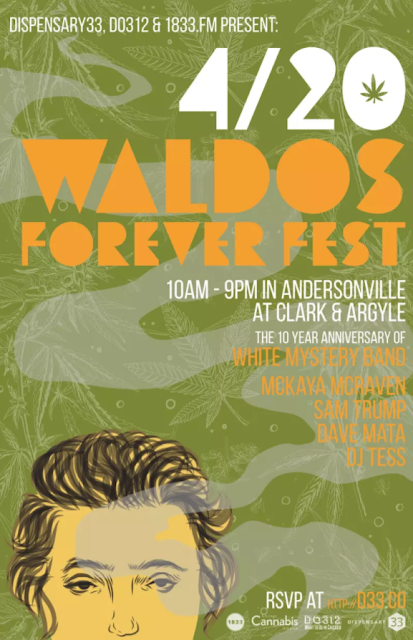 Dispensary 33, Do312 and 1833 Presents are teaming up for the first annual Waldos Forever Fest! The fest will unfold outside the block of D33’s location in Andersonville, providing a full day of music, education, and fun for cannabis lovers - and anyone that loves a good time. From morning ‘til night, we'll curate a cast of vendors, musicians, cultivators, educators and - of course - a munchie food truck court.

La Cocinita
Cupcakes For Courage
The Fat Shallot
Did you ever wonder why 4:20 is so significant to cannabis culture?

Rewind to the early 1970s, a group of ‘Waldos’ - or four high schoolers who regularly hung out by a wall - from San Rafael, CA, embarked on a failed treasure hunt for an abandon cannabis plant. The Waldos set their meeting time for the hunt at 4:20, a random time in the sunny afternoon, but little did they know they would forever change the culture of cannabis.

Why 4:20? 4:20 gave, at the time, the ‘counter culture,’ a secret code to discuss cannabis use. Today, the term is now well known and accepted by many, as cannabis use has surpassed a counter-culture and is accepted by many humans in the present day as a healing plant for many.

We pay tribute to the Waldos for the significant strides they made for the acceptance of cannabis with Waldos Forever Fest 2018!
By Uptown Updater - April 04, 2018