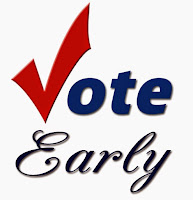 Thankfully, the primary campaigns are in the home stretch and we only have to hear the wannabes attack each other for another couple weeks.

Election Day is Tuesday, March 20th, but you can vote early anywhere in the city beginning today.

If you are already registered to vote, you just need to show up at an early voting site anytime between today and Monday, March 19th, to cast your ballot. ID is not required, but is suggested.

Unlike Election Day, you can early vote at any of the 51 early voting sites. You do not have to vote in the ward in which you live.

Early voting hours are:
If you have any questions about your registration or what the ballot looks like, check out www.ChicagoElections.com.
By Kate Uptown - March 05, 2018