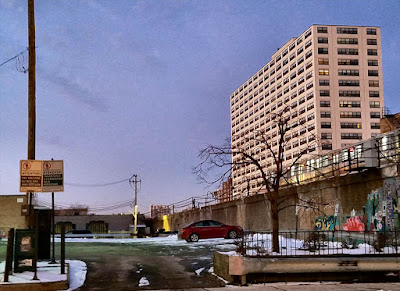 It's a sign of things to come! The City of Chicago has announced that it will lease the parking lot it owns at 1130 West Lawrence to the CTA for use as a staging area for the reconstruction of the Lawrence Red Line station beginning in 2019.

The lot, which is located between the Uptown Lounge and the elevated tracks, will go under lease beginning June 1, 2019. It will be used as a staging area for construction equipment and supplies that will be used to completely renovate the Lawrence station and the tracks on either side of it.

Lawrence will be the first of four stations to be rebuilt as part of Phase 1 of the  CTA’s historic Red and Purple Modernization (RPM) project. The other stations are Argyle, Berwyn, and Bryn Mawr.

Dating back to 1923, the Lawrence station will be completely renovated. There is no final design yet, but the CTA says the new station will include an elevator, a larger station house footprint, and wider platforms, among other modern amenities. More than 1.1 million riders use the station annually.

Why the Red Line and why now? The CTA says that, after more than a century of use, the tracks and stations of the North Side Red and Purple Lines are "approaching the end of their useful life" and are 40 years past their expected lifespan. In addition to being the most heavily traveled train lines in the entire CTA system, they also have the fastest-growing ridership numbers.

The project is set to begin in mid-2019. But if there's one thing we've learned over the years, it's that most things take more time than projected. We'll hope for a 2019 date, but won't be placing any bets.
By Kate Uptown - January 18, 2018