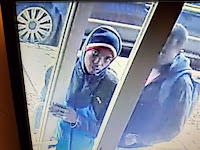 Some good news in the case of the alleged Sheridan Road burglars who may have entered the building by using a Post Office-issued master key. (Our original post is here.)

Images of two men entering and leaving the building were caught on high-def security footage, and screen grabs were distributed around the neighborhood and online. One such image appears at the right.

One of the people whose home was burgled got this notice Tuesday:


"A juvenile offender was arrested and charged with the burglary to your unit.

An adult offender has been identified and we are investigating him to build a more solid case in order to charge him with burglary as well.

CPD is working with the US Postal Inspectors (the federal law enforcement arm of the USPS) in this ongoing investigation.

We can't think of a better rationale for having on-site security cameras. We're sure the clear images it captured were hugely instrumental in identifying the alleged thieves. We'll update if and when we learn more.
By Kate Uptown - December 06, 2017