What's Going On At JJ Pepper? Your Guess Is As Good As Ours 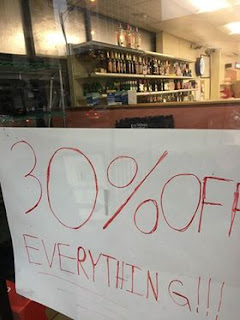 A much-asked question lately: What's going on with JJ Pepper? The shelves are 95% empty, the signs in the windows say everything's 30% -- then 40% -- off, there are new faces behind the counter, and there've been several changes of management in the past year.

A UU contributor did some sleuthing and discovered that the store's licenses -- for selling food, cigarettes, and booze -- were all renewed just last July under the name of the original owner. She also discovered that the assumed name of "JJ Peppers Food & Liquor Store #6" has been dropped and the DBA is now listed as inactive.

Our guess is that the owner is dropping the franchise affiliation with JJ Pepper and reopening as an independent store. But that's just a guess.

With next-door Lawrence House close to being fully occupied, we think it would be a really bad time to give up the golden ticket, the package liquor license. We'll have to wait and see how it all plays out. If anyone has any definitive information, please feel free to put it in the comments.