The city issued a lengthy press release Monday about the official opening of the Wilson station. It gave a good summary of the changes and improvements: 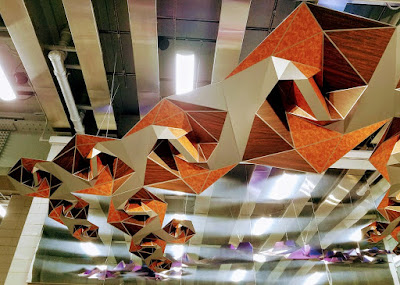 The mayor and CTA today unveiled public artwork that was created especially for the station by Cecil Balmond, a world-famous artist, designer, and engineer known for his large-scale public art installations around the world.

The artwork, known as Arpeggios, is a multi-faceted sculpture suspended from the main stationhouse enhanced by a reflective wall and LED lighting. Customers moving through the turnstiles will notice the strong geometric shapes of the artwork as light is reflected to create the feel of continuous movement. The artwork celebrates the 1920’s Art Deco style found in Uptown’s historic architecture, and echoes the look of the Gerber Building across the street, which is currently undergoing reconstruction."

"The project will be fully complete in January 2018. Between now and then, the CTA will complete remaining components of the Wilson project, including: