"Dealer Divvy" Station On The Move 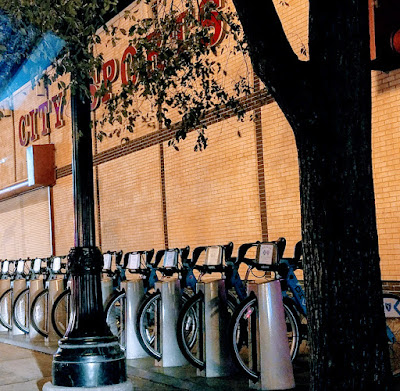 Rumor has it that the Divvy bike station at Wilson and Broadway, which has turned into a very convenient place for dealers of all kinds of substances to ply their trade, will be moved any day now has moved. It's gone west, in front of the new Wilson station, in plain view of an array of security cameras. Smile pretty, folks, and be sure to show your faces to the cameras.

For everyone who complains about constantly seeing drug deals, are you calling 911 each time? You can do it, and be anonymous. Instead of saying, "Someone should do something about that spot," be one of an army of someones.

For those who may be new readers of the blog, something we've learned over the years is that the police brass base their deployment of officers on the number of 911 calls. Fewer calls mean fewer officers.

Good news for Wilson and Broadway, and hopefully more arrests with the cameras being able to identify the sellers in the future. (But they need you to call in order to do it.)
By Kate Uptown - October 19, 2017