Renovations And A New Owner For The Hazelton Apartments On Montrose 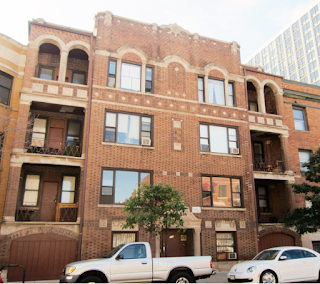 The Hazelton, an SRO located at 851 West Montrose, has changed hands and renovations have begun.

It's hard to believe, looking at it from the outside, that this building contains 75 units. It was built in 1915 as the Montrose Hotel and remained as such well into the 1970s. In 1928, it had a barber shop in its ground floor retail space (no longer in existence).

The sale, for just over $2million, was finalized last August after the purchaser and seller complied with the conditions of Chicago's relatively new SRO Ordinance.

The owner is a newly formed LLC owned by the principals of City Pads, a company that owns and rents apartments in Edgewater and other neighborhoods across the city. In a prospectus that was online last year, but is no longer available, it says,

"City Pads intends to: Redevelop the Hazelton building; an SRO property in the Uptown neighborhood... Re‐tenant and raise rents.... Rehabilitate the building structure; replace all the mechanicals and plumbing systems.... Completely rehabilitate the residential spaces of the building... Provide a minimum of 10% affordable housing.... Quickly fill the building post‐rehabilitation... Hold the property for a minimum of 7‐10 years in an attempt to maximize cash flow in an improving neighborhood."

Ten years ago, the Hazelton was run by one of Uptown's less well-thought-of landlords, John Klyse/Circle Management. In 2009, then-48th Ward Ald. Mary Ann Smith arranged to have city housing subsidiaries removed from Circle Management's properties in the 48th Ward, citing 60 building violations as proof that Circle was a "bad landlord" who maintained "dangerous buildings." The Hazelton, being in the 46th Ward, had no such incentive to clean up its act. It was regularly in housing court, along with 1325 West Wilson, which Circle also managed.

The new owners plan to deconvert the building into 60 units. Building permits were issued this week for the renovation.
By Kate Uptown - June 16, 2017