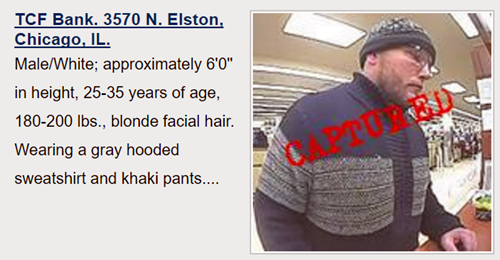 The FBI thinks they've got their man. Rest easy, Jewel and TCF employees!

Michael Weimer of Lakeview was arrested late last week and charged with robbing the TCF Bank branch located inside a Jewel-Osco store at Broadway and Cornelia. Additionally, the FBI links him with three additional TCF branch robberies in the span of a month, including one in Uptown.

News stories say the bandit got only $2000 or $3000 per robbery. We don't think that's the kind of money worth throwing your life away for.... but that's just us.

A citizen tipped off the Feds after seeing Mr. Weimer walking on the 3900 block of Broadway after the third robbery. He was arrested on drug charges at that time, and bonded out. After he allegedly held up his fourth bank a few days later, he was arrested on federal bank robbery charges. 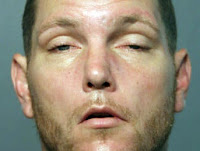 He was looking pretty rough in his mug shot, not much like the screen shots from his alleged robberies, nor much like the doppelganger of a retired NFL quarterback or the local host of a handyman show. The stress of being on the FBI's website and whatever personal problems cause a person to turn to bank robbery must weigh heavily.

If it does turn out that Michael Weimer is the bank robber, we hope the citizen whose tip led to his arrest gets the promised reward offered for information leading to his capture.

For more info on this story: