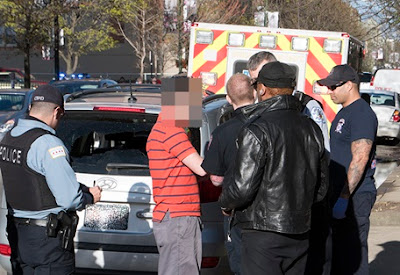 This post has been updated to reflect more detailed and accurate information received in the past few hours:

Shots were fired near Sheridan and Lawrence around 5:40 this evening.  A reader took this photo of a driver whose back car window was shot out -- no injuries except glass nicks to his neck, which is pretty miraculous.

Earlier today, around 3pm, there was more commotion at Lawrence and Sheridan, with an ambulance on the scene, but no reports of any victims.

What is particularly troubling about the time and location of today's incidents is the close proximity of Alternatives, McCutcheon School, Buttercup Park, and the Boys & Girls Club, all of which are teeming with kids, especially in the warm weather we experienced earlier.

We are grateful that this driver was not hurt more seriously.

Beat 2024 CAPS meets on the third Thursday of each even-numbered month at the Margate Park Fieldhouse. That is tonight. If someone attended, can they please email us at uptownupdate@hotmail.com and let us know if these incidents were discussed?

"I attended the CAPS meeting last night and yes, the Lawrence/Sheridan shooting was discussed.

There were 3 police officers at the meeting and another (perhaps commander? he had a white shirt - the others had blue) came in several minutes late. He said he was late because of this event.

The details he shared were that a black male on foot was firing shots aimed south from the northeast corner of Lawrence/Sheridan. They believe he was shooting at another guy who was somewhere on the south side of Lawrence.

There was a guy in a car northbound on Sheridan waiting to turn east on Lawrence when the shots were fired. His vehicle was hit multiple times and luckily he was not hit.

The shooter fled east on Lawrence on foot and apparently touched his hand to a window at 910 Lawrence - the police are trying to pull a usable fingerprint from there. Unfortunately the shooter got away."
By Kate Uptown - April 20, 2017