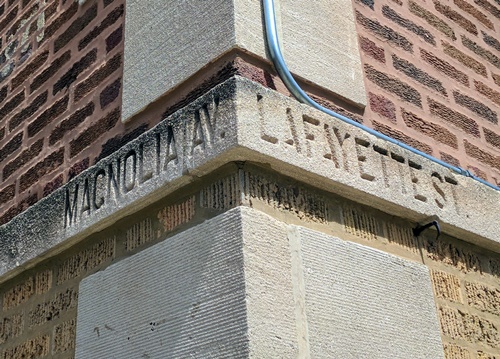 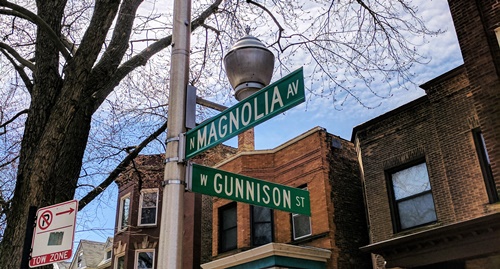 Did you ever notice the street names carved into the building at the northeast corner of Gunnison and Magnolia? We never did. And then the folks from Forgotten Chicago who spoke at the Bezazian Branch Library a few weeks ago brought it up, among other "hidden in plain sight" tidbits.

We did a little research, and found out that the stretch of Gunnison that runs from the lake to 1250 West used to be called Lafayette Street. In the 1930s, many Chicago streets were renamed (310 of them, to be exact), mostly to eliminate duplicate names. Of course, everyone wanted the other streets to be renamed while their street kept its original name.

There was a Lafayette Avenue on the South Side and a Lafayette Street up north. Both streets had advocates who wanted to keep the name, but one of them was going to have to go. So here's how it was decided that Uptown's Lafayette would be renamed, according to the Tribune in December 1935, with a little swipe at the people of Uptown:


"Ald. William Murphy [17th], 6634 Lafayette avenue, and some of his constituents objected that 'home owners with sentiment live on Lafayette avenue while Lafayette street is peopled with apartment dwellers and roomers who have no sentiment.'

Touched, the committeemen agreed with him and voted to change the north side's Lafayette to Gunnison street."

According to Patrick Butler's Hidden History of Uptown and Edgewater, the name Gunnison commemorates developer Frederick Gunnison, who once owned the subdivision the street runs through.
By Kate Uptown - April 07, 2017