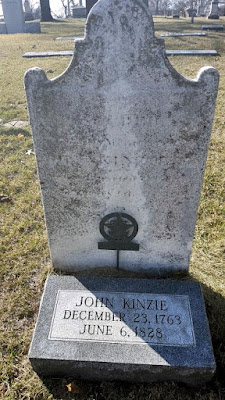 Taking it all the way back for Throwback Thursday. "Meet" John Kinzie, who lies in Graceland Cemetery, and that makes him the oldest Uptown resident. In fact, he is considered to be the first person of European descent to have settled permanently in Chicago. He got here in 1800 and bought the lands of Jean Baptiste Point du Sable, the city's first permanent resident and founder.

John Kinzie has a few other distinctions:

If you want to see his grave for yourself, it is located just across the road from the famous "Eternal Silence" statue carved by Lorado Taft.
By Kate Uptown - February 23, 2017