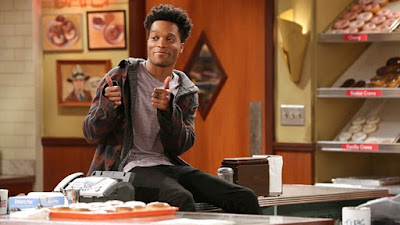 For the past year or so, we've been hearing that a comedy series based on Tracy Letts's Superior Donuts is coming to CBS. Based in Uptown, the play tells the story of a changing neighborhood, as seen through the relationship between an aging former radical who owns a rundown donut shop and his sole employee, a young man who has high hopes for the place.

After a couple of pilots were filmed, Superior Donuts will finally air in February. It stars Judd Hirsch and rising star Jermaine Fowler. There will be a cast of donut store regulars that includes David Koechner, Maz Jobrani, Anna Baryshnikov, Darien Sills-Evans, Rell Battle and Katey Sagal.

After a debut on February 2nd at 7:30pm, it will move to its regular time slot, Mondays at 8pm, beginning February 6th.

It's interesting that a series about Uptown Chicago set in present time is being filmed in Los Angeles, while the real Uptown is standing in for seedy neighborhoods seen in Dick Wolf's "Chicago" franchise TV series.
By Kate Uptown - December 17, 2016