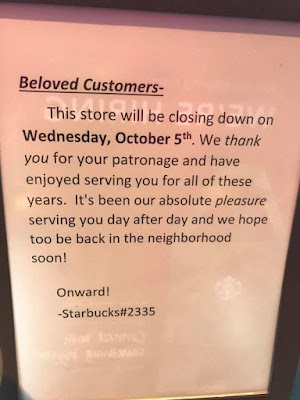 Meanwhile, a block south of Uptown:

Another indication that the gut rehab of the Eagles Building at Broadway and West Sheridan, as well as most of the 3800 block of Broadway, is really happening. Reader Jason Thompson sent a photo of the sign he saw posted in the window of the corner Starbucks, saying that October 5th will be the last day at that location.

Rumor has it that this Starbucks will be opening elsewhere in the neighborhood. It's possible. When the Starbucks across from Wrigley Field on Addison closed due to demolition, it reopened a couple months later, a half block away in the old Hi Tops storefront on Sheffield.

In the meantime, caffeine seekers may have to make do at the Dunkin' Donuts, located a half block north on Broadway.
By Kate Uptown - September 26, 2016