A Walk Down Broadway - Part One 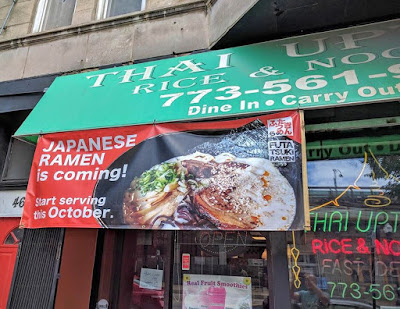 Fans of Thai Uptown at 4621 Broadway should prepare for some additions to the usual fare. Sam and Malinee, the couple who owned and operated it for nearly a decade, have retired and a new owner has begun to put his mark on the place. He stressed to us that he wants to retain the old customers who were so loyal to Thai Uptown (we put ourselves in that category), but will be adding new Japanese dishes, including ramen.

As the sign says, the switch will take place in October. The restaurant will have a new name, but will retain the same phone number (773-561-9999). Already there are some visible differences -- the restaurant's walls have been painted in earth tones to complement the dark wood tables that will soon be in place.

The new owner told us that many of Thai Uptown's signature dishes will remain on the menu and, if possible, he will offer off-menu choices of customer favorites. The best part is, Thai Uptown's cook has been retained, so if you liked the food before, the same gentleman will be cooking it.

We look forward to trying out new dishes, but we're also really happy that the crab rangoon will remain on the menu. Yum!
By Kate Uptown - September 02, 2016