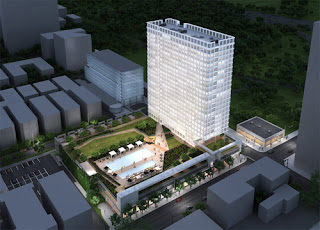 Here's the official City press release on the approval of the Maryville project. Interestingly, there were several other TIF plans approved yesterday, including giving Whole Foods $8million to move a distribution center from Indiana to Pullman.

Planned for the northwest corner of Montrose and Clarendon avenues, the 381-unit project by JDL Development and Harlem & Irving Cos. will include a 31,000-square foot grocery store and 278 indoor parking spaces. The project will also include and a 6,000-square foot retail building on the east side of Clarendon.

Up to $15.8 million in TIF assistance will be allocated toward site preparation expenses. The site is currently occupied by buildings constructed in 1957 for Cuneo Hospital and later utilized as a Columbus-Maryville children’s shelter. The buildings have been vacant since 2005.

As part of the redevelopment terms, 20 units in the 26-story complex will be made available at affordable rents. The developers will also pay $5.7 million into the City’s Affordable Opportunity Fund, which provides rental subsidies for very low-income residents and supports the construction and rehabilitation of affordable housing citywide. A portion of the affordable housing payment will support a pilot program announced this spring by Mayor Emanuel that will provide rental subsidies for 75 homeless people living in makeshift encampments across the city.

The developers will also provide $4.6 million to help renovate the nearby Clarendon Park field house.

The Montrose/Clarendon TIF district was established in 2010 to support the site’s redevelopment.

All TIF funding for the project will be generated by future property taxes on the 2.3-acre development site, which is currently tax exempt. The assistance will be provided in annual installments following project completion and the fulfillment of all TIF requirements.

The project is expected to generate up to 60 permanent, full-time jobs and up to 675 construction jobs, as well as $3 million in annual property and sales taxes."
By Kate Uptown - June 23, 2016