Surf's Up At Wilson/Montrose Avenue Beach 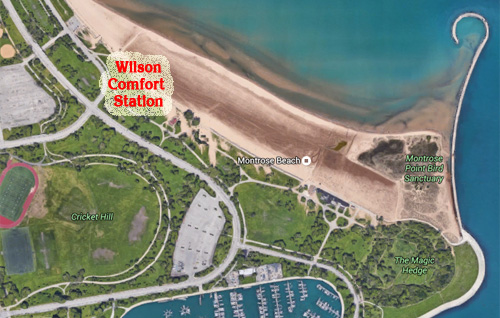 Update: We have been told that the rendering below is from a previous incarnation of the proposed surf park. The new proposed location is further west, away from the Magic Hedge, The Dock, the bird sanctuary, the Wilson Beach House, and the volleyball courts. It is near the Wilson Comfort Station, which is off Simonds Drive, immediately south of Wilson. It's a stone building that currently has a Mexican restaurant in it, directly east of Cricket Hill, near the water.


via the 46th Ward office:
Alderman Cappleman is hosting a community meeting at Clarendon Park Community Center on Thursday evening May 19th beginning at 7:00pm.  It is focused on the proposed renovations to the existing Beach House, Concession and Restrooms at Wilson Ave.

From the proposed vendor; Chicago Surf, the main improvements would consist of:

1) RESTROOMS: Completely renovated, both utility lines (water / sewer) - severely needed as the existing infrastructure has not been touched in over 60 years, but also cosmetically - renovating the toilets, sinks, mirrors, automated soap and drying dispensers, etc.

2) SECURITY:  The new vendor to the existing concession area; Chicago Surf would provide licensed security officers during operational hours plus multiple 24/7 security cameras linked directly to the 19th Police District Headquarters - Currently NO security in the area, this would be a HUGE benefit to the community.

3) CONCESSION / COMFORT STATION: The current concession house's water / electric condition, and cosmetic status is in horrific condition.  There are major sewage, water and electrical issue with the existing building.  Chicago Surf would improve these issues to Code.
4) SURF PARK:  Chicago Surf would add an attractive on-land surf park to the concession house.  This is a growing sport which attracts people of all ages.  Their services would include open surfing, surf leagues, day camps, Community Days, birthday parties, and more!