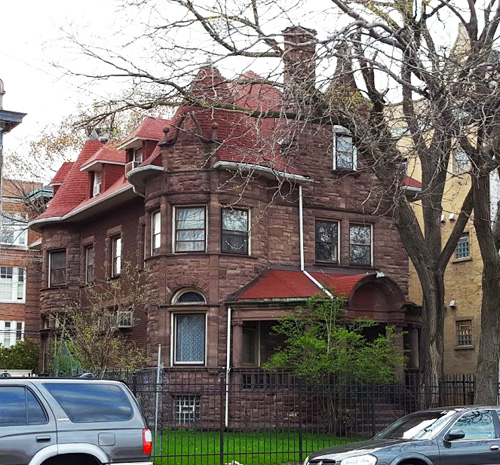 The mansion at 4512 North Sheridan, which has been home to the St. Augustine Center For American Indians since 1969, is for sale. According to the real estate listing (which has its address listed as 4516), the three-story home was built in 1905 by a doctor. (Other than that, we don't know much about its history.)

The listing says, "Most of the amazing Victorian details are still in place, and could be restored, including a grand staircase, stained glass windows, cast crown moldings, doors, fireplaces, etc."

It has 3850sf of space, 11 bedrooms (14 rooms total), one full bath, and four partial baths, with five parking spaces off the alley. There's a full basement, two fireplaces, and a large fenced yard. Prior to it becoming home to the non-profit St. Augustine Center -- an Episcopal church and social services provider -- it was student housing. At the very low price of $650K, it's a fixer-upper for the right buyer.

The real estate listing is aimed at non-traditional buyers (it mentions possible use as a B&B, student/elderly housing, an SRO, a consulate, a school, or a community center), and says that there's a possibility "to put the home on historic registry and receive tax credits and freeze real estate taxes." We'd love to see that happen.

Ominously, it also mentions that the building could be razed and the current zoning allows for up to seven new units to be built on the lot. We'd hate to see that happen.

If you know anyone who'd be interested in putting a Victorian mansion back together, please show them the current listing (no interior photos are included, just the outside).
By Kate Uptown - May 02, 2016