Date Announced For The End of an Era: Shake Rattle & Read Sets May 21st As Last Day 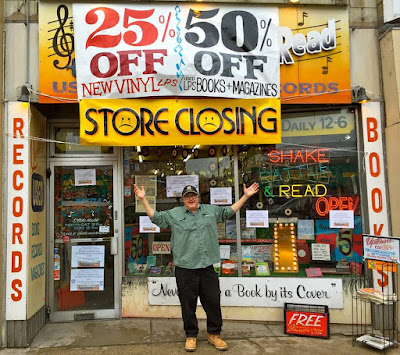 We've known it was coming, but now there's an official closing date for Shake Rattle & Read. The legendary book and record store will close its doors on May 21st, and proprietor Ric Addy will move to happy retirement in Florida in June. So if you want to get your last fix on everything in the store, all of which is greatly discounted, get to 4812 North Broadway before he closes his doors forever.

There's one good thing, though. You can still say good-bye to Ric at the Green Mill, at a special farewell concert to all who have called Ric a friend over the past decades. On Facebook, he writes:


Goodbye Chicago! The day after Shake Rattle & Read closes, Dave Jemillo offered me his joint Sunday afternoon May 22 from 1-4pm. Cash Bar. Performances by Jazz Piano Genius Tommy Muellner, a quick acoustic set by the Pogo Ponies, some other surprise guests and Dave Jemilo said he will have the Mic turned on for anyone who wants to sing a song, say a few words or roast me! Moving to Florida in June - I will miss you all and the Green Mill! Please 'Share' with all our friends who are not on Facebook ( and with those who are! )