One Empty Lot Prepares For Construction, Another For Use As A Staging Area 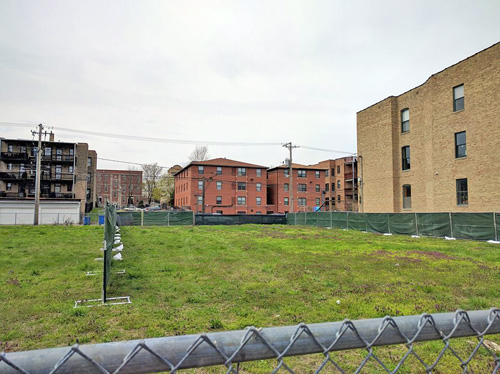 Yesterday the long-empty adjoining lots on the 4600 block of Malden were fenced off with green tarp. It is a sign of progress, but not at that site.

A reader sent in this photo and says, "Before everyone gets too excited about a new development coming to the large vacant lot in the 4600 block of Malden, this is simply being used as a staging area for the upcoming 4627 Beacon development. Both lots are owned by the same developer. You can see how both lots line up perfectly, allowing easy access for construction equipment."

4627 Beacon has sat empty since Christmas Eve of 2005, when developer Chris Byrne demolished the oldest house in Sheridan Park, an 1892 orange-coded Queen Anne-style home. (You can read more about it in the Tribune.) The lot is now owned by Steve Sgouras, who will be building a seven-unit condo building on the Beacon site. With the Malden lots being set up to be a staging area, we are guessing that construction on the new building will get underway very soon.

With the same developer owning the Malden lots, dare we hope they will be developed sometime in our lifetimes? They've been empty since at least the mid-1970s.
By Kate Uptown - April 20, 2016