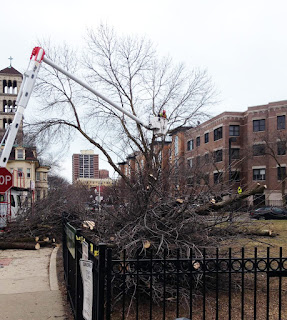 The infestation of the emerald ash borer has come to Buena Park Circle (Buena and Kenmore). Sadly, most of the trees there are dead or too badly diseased to be saved, so the city has been removing them. According to reader Jeffrey Hamrick, who took this photo, the honey locust trees on the north side of the park will likely survive, but the rest must come down.

The emerald ash borer epidemic has hit the Midwest hard. Nearly 20% of all the trees in Chicago are susceptible to the tiny beetle, which was first discovered in Illinois in 2006. Thousands of trees have died or had to be removed.

It's similar to when Dutch Elm Disease swept through Chicago. If anyone remembers, St. Boniface Cemetery and portions of Sheridan Park were stripped of most of their trees during that devastation. The good news is that other trees have taken the place of the elms, and eventually the same will happen with the ash trees.

How destructive is the beetle? Well, once the eggs are in the tree, that's pretty much it. Treatment is expensive and not always successful. Even wood used from downed trees can carry the disease, so it can't be used for firewood or mulch.

According to Jeffrey, a Parks District worker told him that 60% of the trees in Chicago's parks are ash, which does not bode well for the future. He says, "I predict we'll see very different trees in the city in the coming decades, most likely trees from further south, such as the Kentucky coffee tree." Hopefully Buena Park Circle will be reforested very soon.