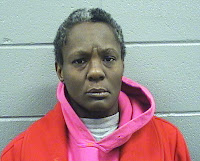 A homeless woman has been arrested and charged with the beating death of a 63-year-old Uptown man last December. This week, the police arrested Sabrina Shaffer, age 45, at a Gold Coast donut shop.

Keith West was found severely beaten in his apartment on the 4500 block of Sheridan Road on December 26th after a friend asked the police to do a well-being check. He was taken to Illinois Masonic, where he passed away on December 28th.

The police classified his death as a homicide investigation a week or so later. They said that they did not have anyone in custody, but kept quiet that Sabrina Shaffer, who uses the address of the Pacific Garden Mission downtown, had been seen leaving Mr. West's home with some of his belongings shortly before he was found critically injured. The relationship between the two is unclear.

This past Wednesday, Ms. Shaffer caused a disruption in the Dunkin Donuts store at Chicago and State, and the police were called. When they ran her name, the information came up that she was a person of interest in the death of Mr. West.

Ms. Shaffer appeared in bond court at 26th & Cal on Saturday and was charged with first-degree murder. Her bond was set at $750,000. According to the Tribune, Ms. Shaffer told the court she suffers from mental illness. The court records show that she has a long rap sheet going back to the 1980s, and was once sentenced to a seven-year prison term for robbing and battering a senior citizen.

Our thoughts go out to the friends and family of Keith West.
By Kate Uptown - February 07, 2016