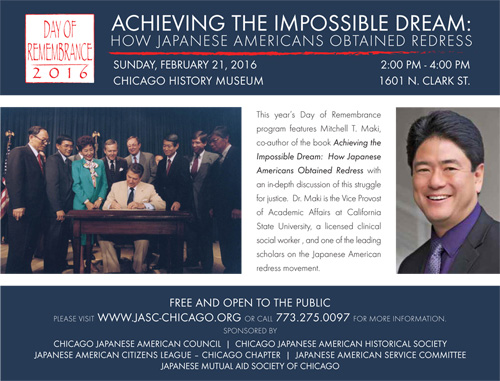 The Japanese American Service Committee (JASC), located at 4427 North Clark, is one of the sponsors of the Day of Remembrance, an annual event commemorating FDR’s signing of Executive Order 9066 on February 19, 1942, which authorized the forced removal and incarceration of 120,000 Japanese Americans during World War II. More than two-thirds were United States citizens. You can still meet people who were forced into the internment camps and their descendants living in Uptown.

This year's events will take place on Sunday, February 21, at the Chicago History Museum, with the spotlight on the Civil Liberties Act of 1988, which authorized an apology and monetary compensation to surviving incarcerees from the Japanese American concentration camps.

The main speaker will be Mitchell T. Maki, co-author of the book Achieving the Impossible Dream: How Japanese Americans Obtained Redress. There will be a discussion with youths/young adults about redress between noon and 1:30pm, and the main program will run between 2pm and 4pm. Both are free and open to the public. For more information, see JASC's website.
By Kate Uptown - February 03, 2016