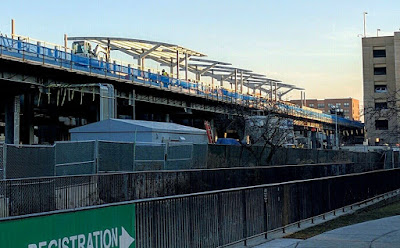 As the CTA enters the last part of Phase 1 of Wilson L construction, we can see how the finishing touches are shaping up. If all goes according the schedule, the trains will be rolling on the new tracks by the end of March or beginning of April.

This Monday through Wednesday (February 22 through 24), Wilson Avenue between Broadway and Clifton will be closed to vehicular traffic 9am-4pm for... drum roll... installation of new stairs to the new platform.

We don't know what Phase 2 of the project will be. We are guessing it will involve knocking down the existing set of metal tracks that date back to 1908 and replacing them with another set of new tracks. We'll let you know as soon as the CTA lets us know.

Considering that ten months ago, there were heavy concrete trestles in place, it's amazing that they've been able to demolish and rebuild it in such a short time, especially considering they did it without shutting down the Red Line service. We can't wait to see the trains roll along the newly rebuilt, and faster, tracks.

UU Note: StreetsBlog Chicago has a short article on the renovations: Uptown Chunk: The Wilson Station Overhaul Is Moving Along Nicely
By Kate Uptown - February 19, 2016