The End of an Era: Shake Rattle & Read Gives Notice Of Ric's Retirement 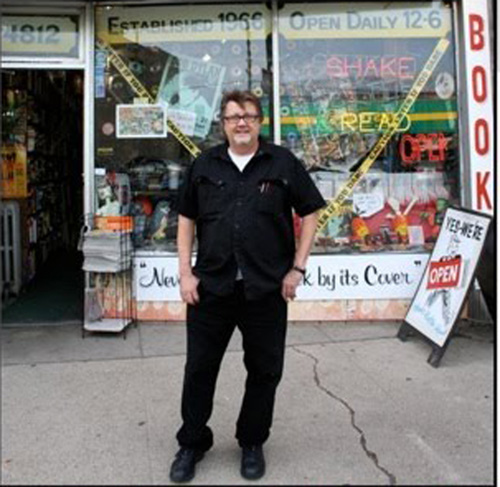 
“It’s time,” Ric said. “At age 64, and after 30 years in the same location, I’m looking for new adventures. I need to take time to go see the rest of the world and be with my family and friends in Michigan and Florida. I’ll miss all of my friends in Chicago, but I won’t miss the winters.”

Unfortunately, you can't catch him today, as there's a follow-up note saying he's been admitted to the hospital for an emergency procedure, but you can leave him a note. The store is still open, as it always is, noon to 6pm.

From playing with his band, the Pogo Ponies; to holding court and telling great stories; to having deeply discounted annual sales; to sponsoring bands in the store; to being on the board of Business Partners/The Chamber for Uptown; to Shake Rattle & Read's always interesting window displays, Ric is an Uptown legend and it's really hard to imagine how it will be without him.

But he's given the store and this community his life and deserves some warm winters, some travel, and some relaxation. Here's to Ric and a helluva victory lap. Let's let him know how much his presence is and has been appreciated.
By Kate Uptown - November 20, 2015